On the 6th of February, Secondary students were given a chance to participate in House Drama, a competition in which students from years 7 to 13 were challenged to quickly create a short piece and perform it. The students were split into two groups and were provided with an object that would have to be the focus of their piece. The performers were also required to include three tableaux and two spoken thoughts. With only nine minutes to create the piece, both groups worked quickly and ended up creating two very contrasting performances. Many of the Houses had to be mixed to create even teams, but it was eventually decided that Purple House had won.

At the beginning of this year, the Year 11s were given a chance to both perform a monologue of their choice and direct somebody else within their class. Each student chose their own monologues that they wished to perform and were put into groups of two. Everybody was tasked with researching their partner’s monologue, the playwright, and the context of the play to better their understanding of the monologue itself. They were then given the chance to direct their partner and create their “director’s vision” (what they would like the piece to look like if given unlimited resources). Although different stages and types of theatre couldn’t be used, the students were given a chance to create props, wear a costume, and choose simple lighting for the performance. The final performance was on the 28th of September and was performed in the Black Box to anybody who wished to attend.

The Year 11s recently concluded their unit on stage combat and Shakespeare. Throughout the unit, the students were taught ten different stage combat moves, including the slap, hook, choke, hair drag, and more. In addition to learning these movements, each student also had to create a “stage combat manual”. This could be in any format that the students wished (video, photos, etc.), and was to teach the reader/viewer about each of the moves learned in stage combat, as well as provide safety tips and advice on positioning. After creating their manuals, the Year 11s were challenged with performing the opening scene of Shakespeare’s “Romeo and Juliet” in groups of five to six. These pieces were presented during Secondary lunchtime on the 5th and 6th of December, and were staged in public areas throughout the school. Before and during these performances, the students were made to consider the advantages and disadvantages of performing to an open and public space, and reflected on how well it worked out. 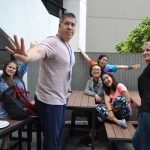