On the 3rd of May, the Lower secondary production was performed three times in one day, to a lively and engaged audience. Our first audience during the official dress rehearsal were year 4 primary students, who cheered and laughed along with Ernie’s imaginings, while the afternoon and evening performances were to students, parents and staff attending, who were almost as enthusiastic as the youngest of year 4!

Audiences smiled at the grandmother being rescued by the helicopter, whooped the knockout count  of the boxer defeated by 68-year-old Aunty May, and gripped the edge of their seats as Mr Fraser rescued the librarian with the broken leg from the top of a mountain, and everyone tapped their feet to the glorious music of the infectious marching band that marched out of the doctor’s office. 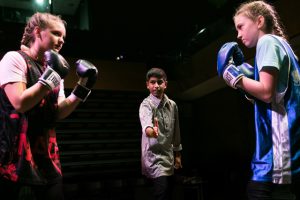 What wonderful performances the cast and crew put on! Although they made it look easy, there was a total of more than 18 contact hours with students in rehearsal and production meetings, and doubtless many more hours of line learning and setting up required out of these times. Parents have supported us throughout the process, and without their tireless encouragement for the students, we couldn’t have done it. 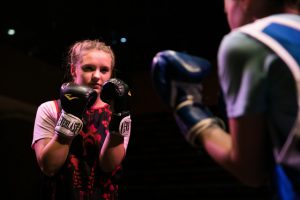 All students involved were from years 7–9, and several students were performing or holding production roles for the first time, and they took their responsibilities very seriously. As a result, the stage crew helped all to run smoothly, the lights and sound created the perfect atmosphere and the students on stage performed superbly and really owned their work. The play is truly that of the students and we, as a Drama department, are so proud of them all.

We hope to see all students carry these great collaborative skills on into future productions!

Well done, with hearts from your Director,

I would like to say that it was an absolute delight to see the children really enjoying and relishing the freedom theprocess – I don’t think that you can ask for more than that as a parent. Thanks to all for putting in the hours to bring these kids together and looking forward to the next production. A great achievement! 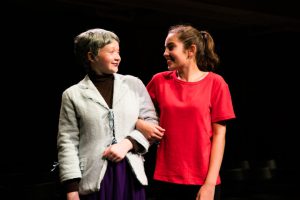 We truly enjoyed the show yesterday!!! Well done for the teachers, crew and kids! I am Luiza’s mom and I must say she had a great time! But what stroke me is that all of them were really truly enjoying the moment and that created an engagement in the audience that was noticeable. Thank you so much for an excellent show! We watched it twice and I agree with you when you say that the kids thoroughly enjoyed every second of it. Thank you for igniting and nurturing a passion for Drama in Caleb…he was in his element! Just wanting to say a big thank-you for the show earlier this month. It really had a lot of punch! I loved the interactive nature and there was action here there everywhere – so thank-you and I know everyone appreciates the work of the DC teachers – working back late on projects such as this.

What I liked most about the production was seeing everything fall into place, from us performing on stage, to us doing it in the round, I also really liked how everything changed from us just reading the script, to acting them out – Kayden Lau, Ensemble

What I most liked about the production was how everyone (crew and cast) worked so well together and everyone enjoyed acting in this production, all of the practice time really did pay off for the performance. I felt like everyone was so supportive of one and other and everyone was so proud, even our parents, and we all put so much effort into this play. I enjoyed it and I think everyone did. – Isabelle Mexted

The thing I liked most about the production is getting to see what it is like backstage because this is the first time that I have been in a school play and also getting to make new friends because we get to talk to new people from different years.