This year’s Secondary Production of ‘Nightfall with Edgar Allan Poe’  closed on Nov 29th, 2017. Dealing with darker and more complex themes than in the years before, the play left audience members impressed both by the actors’ abilities onstage, and the effort from the crew that shone through lighting, sound, set and costume to create an atmosphere of tension that Poe’s works demand. We would like to share some of the reviews that we have received from our audience members below:

“Performance extraordinaire: If you didn’t manage to get to last week’s performance of Nightfall, then you missed something truly spectacular. I have to admit I went along wondering whether I would actually “enjoy” the show, however, I was completely mesmerised throughout. The impressive acting, costumes, set, sound effects and stage work combined to produce one of the best secondary productions I have ever seen. Congratulations and thanks to the many, many other people who were involved in some way.” – Mark Beach

“The overall impression was a powerful and cohesive combination of acting, sets, lighting, sound and costumes to create an atmosphere that brought Poe’s poems alive.” – Peter Lasscock

“I just wanted to write to say how impressed I was by the performance last night. The ability of our students to showcase performance abilities continues to go from strength to strength, and you got the very best out of them, particularly impressive given the complex and macabre nature of the text itself. Ethan in particular stood out to me as someone who has developed hugely from a strong starting point since I first saw him perform a few months ago, and really brought his character into 3-dimensional life through his physicality and understanding of the text. I would make similar observations about a number of students – the quality of their performances reflects the quality of input they have had from the staff around them.

The production design and technical management was also, as ever, superb – the house of cards was one of my favourite moments, and Siosi’s ‘shutting of the window’ was inch perfect in both concept and timing. The costumes were also brilliant – incredible creativity with black and white – and I loved the black onesies! Anyway, I could go on, but suffice it to say that I was inspired and enthused when I left school yesterday evening.” – James Smith “Thanks so much for inviting us along to see Nightfall. It was amazing!” – Kylie Harrison

“Thank you for an exceptional evening. We were blown away by the talent at D.C.”– Claire Neal

“It was a real treat to see the final product of all the work you and the team put into this year’s production. Thank you to you and Paul for a brilliant tribute to darker mental conditions. It was a unique delivery of psychosis, fear, depression and more.

It felt like I could have been at a theatre performance in Central or even London.
I sent one of pics below to my film director friend and she curiously wanted to know where this great set and cast image came from!!!” – Natasha Clausen

“Do pardon my delay in commending you, the cast and crew for an absolutely mesmerizing night of entertainment, with the very professional portrayal of Edgar Alan Poe’s ‘Nightfall’. Normally not a great fan of anything to do with darkness, I was surprised as to how my eyes were totally glued to the set throughout, not wanting to miss anything. The actors, props, lighting, sound effects & make up were all so surprisingly professional and amazing for a production put up by high school students. Wow! Your professional training and connection with the students was highly evident in their ability to portray Poe’s madness to a crowd of different ages, abilities & understanding, who thoroughly enjoyed it. I am thankful and grateful that Ethan and all the Drama students have teachers to guide and teach them all the skills needed to put up an amazing show, and to enjoy the making of it. A pat on the back to all involved.” – Violette Godinho

We would love to hear your review! If you would like to submit a review please email: 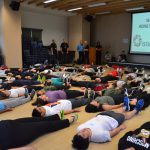 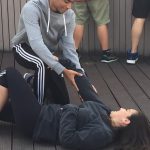