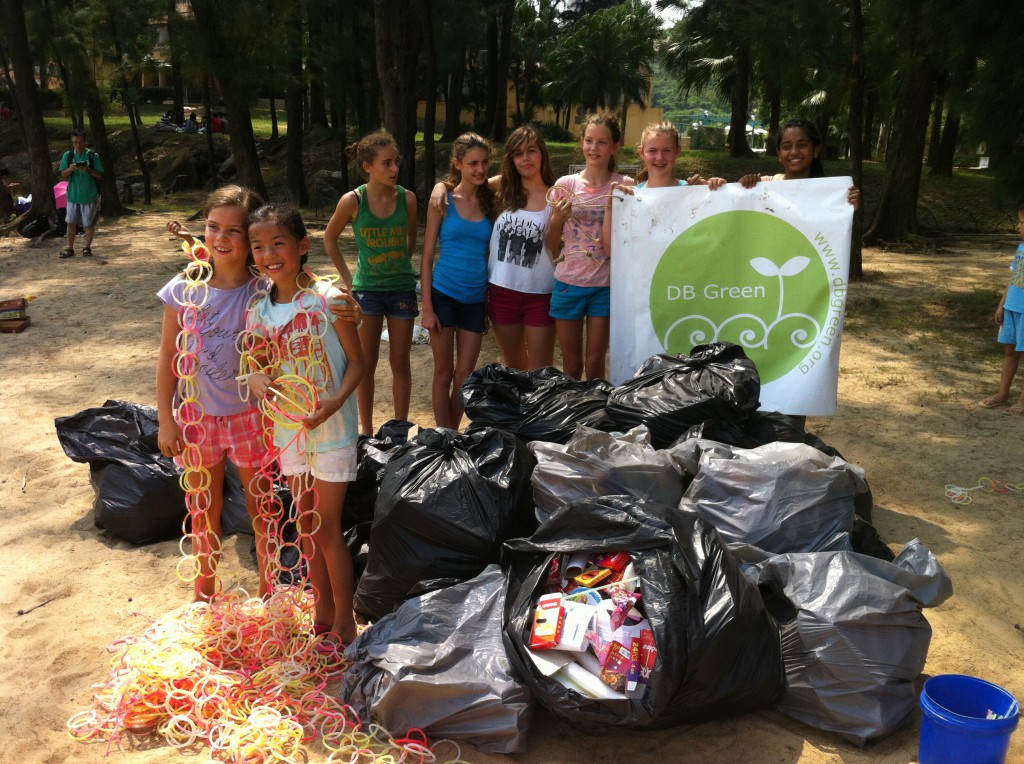 While the Mid-Autumn festival provides a celebration opportunity for our community, it also create a lot of waste!  As such, DB Green and Plastic Free Seas are organising a family-friendly beach cleanup to not only remove the litter from Tai Pak Beach, DB’s main beach, but to also raise awareness about the waste created and left behind on the beach after the Mid-Autumn Festival. Thousands of glow sticks and connectors, perfect condition lanterns with working batteries left inside and many single-use disposable items can be found scattered around the beach.

DB Green is in fact asking that people make an effort to make more environmentally-friendly lanterns.  See this post on their blog on how to do so.

The post-Mid-Autumn Festival Beach Cleanup will be held on Sept 9, 9am to 11am, on Tai Pak Beach. Organisers will supply gloves and bags. DB Green will be hosting a beach clean up this Sunday – the second last beach cleanup before the summer holidays.   They will supply gloves, bags and water refills.  You need to take a reusable water bottle.   Please wear sturdy shoes and sun protection.

DB Green are also looking for a few adult or older teenage volunteers for a special beach cleanup on Sam Pak Wan on Saturday May 10 at 9am for about 3 hours. We are doing a trial for a 2-year marine waste study, organised by WWF.  We will be documenting the trash within a defined area on the beach. Please send an email to dana@plasticfreeseas.org if you can help.

You may be aware that the Environment Bureau has proposed to build a mega-incinerator to handle 3,000 tons of waste daily at Shek Kwu Chau, a pristine island near Cheung Chau.  This proposal has been strongly rejected by many, citing the technology proposed to be outdated, and because of the environmental impacts that it will have.  Many residents on Lantau are concerned about the possible air pollutants that this project will create.   What do you know about this issue?  How will you be affected if the proposal goes ahead?

Here is an article from the South China Morning Post (January 4, 2014) on HK’s proposed waste policy, including the incinerator at Shek Kwu Chau.

We see that the forces in favour of building a large incinerator near Shek Kwu Chau are coming together for another push at getting the project approved by the Legislative Council. A South China Morning Post story recently reported that a group of academics and professionals were calling on the government to scale back landfill and get on with building the incinerator.

“We need to act now, or this will end with rubbish piling up on the streets,” said Professor Poon Chi-sun, of Polytechnic University’s civil and environmental engineering department and spokesman for the new Alliance for Promoting Sustainable Waste Management for Hong Kong. Poon says the government is right to adopt moving-grate technology – in which waste goes through a combustion chamber – in its incinerator plan, adding that the technology is used in 2,000 plants around the world.

What he doesn’t say, however, is that the number of operating incinerators and the installation of new ones is declining. In the United States, the number of moving-grate incinerators dropped from 186 in 1990 to 87 in 2010. In Japan, it fell 25 per cent between 1998 and 2005. In Europe, there is an overcapacity of incinerators because of successful recycling efforts. Not so long ago, New York City issued a tender for a waste management facility specifying that it did not want offers using traditional moving-grate technology.

Professor Irene Lo Man-chi, of the University of Science and Technology’s department of civil and environmental engineering, said the technology had been proved to be a reliable option that was safe in terms of emissions. This is a moot point, and there are peer-reviewed reports showing abnormally high death rates and incidence of cancer among people living near incinerators. We accept that modern incinerators produce less emissions but that is not to say they are safe.

One technology that is known to produce far less emissions than incineration is plasma gasification. However this is dismissed as the wrong choice by Lo, who says it wouldn’t be able to cope with Hong Kong’s volume of waste. And by way of support, she says that problems with plasma technology had led to the closure of a 10-year-old plant in Japan. She omits to say that the plant was closed because it ran out of feedstock. She also appears oblivious to the number of plasma gasification projects that are springing up all over the world.

Ever since the incinerator project was introduced, the Environment Bureau has refused to budge from its insistence that it must be built, even with the change of leadership at the bureau. It also continues with the politically expedient reasons for locating the incinerator at Shek Kwu Chau rather than at Tsang Tsui near Tuen Mun. But it is clear to many people that if any progress is to be made on this, then some aspects of the plan have to be rethought. About 42 per cent of Hong Kong’s waste that goes to landfills is food waste and is between 70 and 90 per cent water.

Clear the Air chairman James Middleton has spoken to three engineers who say it is perfectly feasible for food waste to be shredded at source using garburators and disposed of down the drain and handled by the Stonecutters water treatment plant, which is currently operating at 50 per cent capacity. This idea has been incorporated into the thinking of the New Territories Concern Group, which, after visiting various waste treatment plants, including plasma gasification projects in Europe, produced a report supporting the use of plasma technology. The group is politically significant and includes Junius Ho Kwan-yiu, who, in addition to being a former president of the Hong Kong Law Society, also has the distinction of having deposed Heung Yee Kuk chairman Lau Wong-fat as chairman of the Tuen Mun Rural Committee.

In addition to its support for disposing of food waste at source, the report suggests gasification as a more mature and appropriate technology to meet Hong Kong’s present and future waste management needs. It recommends the establishment of one or more pilot plants to determine the suitability of gasification technology for Hong Kong. This approach would give Hong Kong considerable breathing space for it to take another look at the options available rather than its current approach, which is making little progress.

Help Feeding Hong Kong bridge the gap between hunger and food waste by helping them collect fresh bread and sandwiches from shops across Hong Kong at closing time.

The Bread Run engages individual and pairs of volunteers in the nightly collection of surplus fresh bread. Each bread runner visits 1-2 stores at closing time to pick up the surplus and then delivers the items to a designated FHK drop-off point.  All bread run donations are redistributed via the FHK charity network the same night or first thing the following morning.

There are three ways you could get involved in Feeding HKs Bread Run –
1. Become a weekly FHK volunteer
2. Join the FHK monthly Bread Run
3. Host a dedicated Bread Run for a group of volunteers

Nude food is where you minimize (or eliminate) the waste that you leave over after you have eaten your lunch.  Plastic wrappers, plastic bottles, chip packets, biscuit wrappers – all of these things end up in our rubbish dumps.  Here in Hong Kong, we produce over 6,450,000 tonnes of rubbish a year that goes to landfills, and these landfills are filling up rapidly.

Keen to do something about this?  Keen to be a Nude food dude, and encourage others to go nude?  Then click here to sign up for the DC Nude Food Day committee, and get involved in organizing the DC Nude Food Day.  (This is only open to Year 11 students – and yes, it can be a C&S Project).  Sign up today!

Did you know that about a third of all food produced globally is wasted?  Here in Hong Kong, according to Friends of the Earth (HK), we produce over 3,000 tonnes of food waste every year!  Then of course there are the food issues of famine and ensuring that we produce enough food for an ever-increasing world population.

World Food Day (16th of October every year) is a day declared by the UN General Assembly to aim to heighten public awareness of world food problems and strengthen solidarity in the struggle against hunger, malnutrition and poverty.  We will be holding events / activities here at DC to celebrate this day as a part of our Community Engagement.  We are asking for Year 9 students to form an committee that will orgniase our involvement.   Keen to get involved?  Then click here and sign up today as there is a limit on how many people can join this committee.   And yes – this would be a C&S Project.

‘Trash Trashers’ is a CAS group with the aim of improving what DC does with waste.  As a part of their efforts, they conducted a waste audit to see exactly what goes in our bins.  The group selected 8 garbage bags (a small part of the total rubbish we produce) and checked out their contents.  Below are their findings: 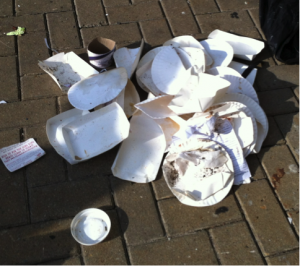 Suggested next steps in order of priority (Based on audit only):

-Signs around school (above general bins)

-Explore compost and how it could be used in the school

-Look into compost and its possible uses in the school