Nature Works Hong Kong, organized by one of the world’s largest conservation organizations, The Nature Conservancy, is a free program designed to empower students to conceive, test, and launch their own environmental conservation projects in schools and communities across Hong Kong.

Last year, over 110 students from 35+ local and international schools join together in 13 project teams. The program combines leadership skills training, a network of volunteer advisors from the corporate and non-profit worlds, and a platform from which student teams can raise support for their ideas. It’s a great opportunity for students aged 14-17 who are passionate about the environment and want to take action.

Further information and application details can be found on the Nature Works website. 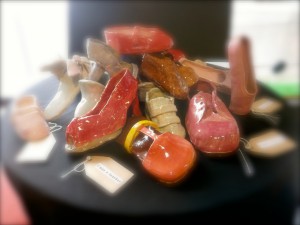 Students from year 9 and 10 recently created their own individual artwork to remember those who passed during the Holocaust. The activity was held as a part of Holocaust Memorial Day (27 January), a national commemoration day in the United Kingdom and other countries that is also the anniversary of the liberation of Auschwitz concentration camp by the Soviet Union in 1945.  Each DC student involved made a shoe out of clay to tell a story of those who were lost. This idea was based on piles of shoes, suitcases, clothing, glasses found in Auschwitz after liberation.

Child labour for our batteries

According to a this report from Amnesty International, major electronics brands, including Apple, Samsung and Sony, are failing to do basic checks to ensure that cobalt mined by child labourers has not been used in their products.

“Due to the radical changes and developments of technology millions of people worldwide enjoy the benefits of new technology, but seldom ask themselves how they are made. Major electronic brands such as Samsung and Apple are failing to ensure basic safety for their cobalt mining child labourers. The youngest child labourers starting at only seven years old are required to work long hours daily exposed to cobalt without protective equipment to shield them from diseases. Glamorous advertisements blind us from realising the suffering the child labourers endure, because Enterprises refuse to verify their usage of child labourers”.

How could you advocate for changes in this practice?