Here is a report from Year 9 student Summer Chiu, who along with fellow Year 9 students Man Yiu Tang, Sharon Jone, Karina Chan, took part in a street sleeping experience to take a glimpse at what it would be like to be homeless in HK.

In this activity, we were to experience a day in the life of a street sleeper.

We started off by doing some volunteering with a man called Ming Gor, who is involved in a programme of delivering cheap or free food to those in need.  The meal boxes that we gave out to the single elderly and the street sleepers are actually prepared and organized by Ming Gor’s restaurant. He also sells cheap meals to the residents for about $16 per meal.  During our chat with Ming Gor, he told us about his hard time running his restaurant because of the high rent fees. When he realized that he earned enough and is able to help others, he started giving out free meal boxes to street sleepers and the single elderly. He is able to make everybody unite and come together to help the poor. He is able to care for a lot of people in Sham Shui Po all at once. We can all feel the warmth and kindness that he have just to help other people. 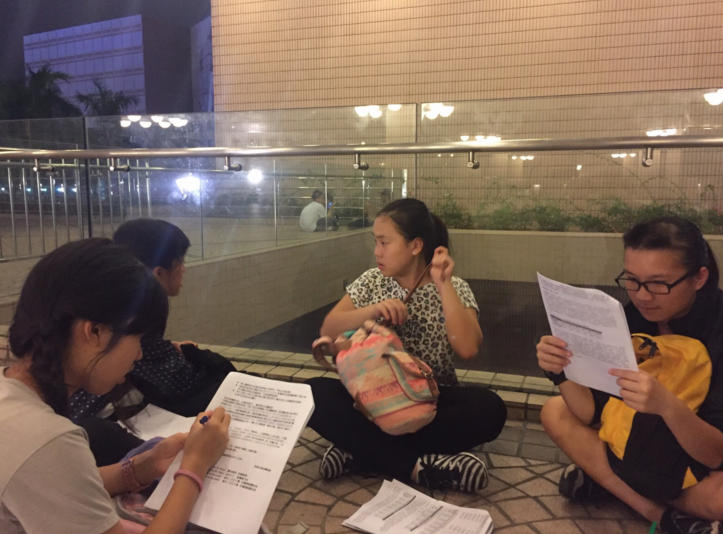 As we were on our way back from giving out meal boxes to elderly, we passed by a street where some homeless lived. The workers who accompanied us said that some of these sleepers are Vietnamese, Mainlanders, and some are from Hong Kong.  When we walked by this place and observed the surroundings, we realized that they don’t have much but the abandoned things that people used to use, which many others would call garbage. When they feel hungry and have no money, they often pick up any other food remains outside of restaurants which are very unhygienic. Some street sleepers can afford to live in a split home, but rather not because in the split homes, even though there is shelter, it is a incredibly small place to live and there are usually unhygienic environments.

We arrived at Tsim Sha Tsui around 10 o’clock, and went to the harbour of the Cultural Museum and enjoyed our break by looking at the beautiful city of Hong Kong. After that, Kate and Stephen have prepared an activity, which was a discussion about the homeless. We played different roles in the discussion: the government, Sham Shui Po residents, Social workers and the homeless, to share different perspectives about the homeless in the streets. Through the discussion, we saw that the government only puts little resources to help the homeless, but would rather spend large amount of money for environmental ornamentation, such as concrete flower pots and the pets garden, in order to avoid the street sleepers from occupying public areas.

We tried to find a place to sleep as there were uneven walls and there are lots of other people chatting very loudly around the area. Next we decided to go to McDonald’s to get ready for bed. We then found relatively clean paper boxes on our way out of McDonald’s which is next to the rubbish bin, and tore them apart so we could use it.

During our sleep, there were lots of things happening around us. It started raining but luckily, it stopped after 5 mins. All the lights are turned off in the area that we slept in, so we weren’t blinded by the lights. At 3 o’clock at night a bunch of young men rode bikes and play tricks with them in our area. According to Stephen, they did nothing to try avoid running over us and they nearly ran over our heads. Then we got attacked by flies and wood fleas throughout our sleep. The wind was howling too and we are all very cold.

In the morning, we all woke up at around 5am in the morning. All night, we were sleeping on the hard ground and having only 1-2 hours of sleep because of the distractions. After a debriefing, we were able to go back home and enjoy our sleep!

It was a very meaningful, precious but exhausting experience. Of course, we did have fun and have learnt something new!