Save the Kitchen Bake Off 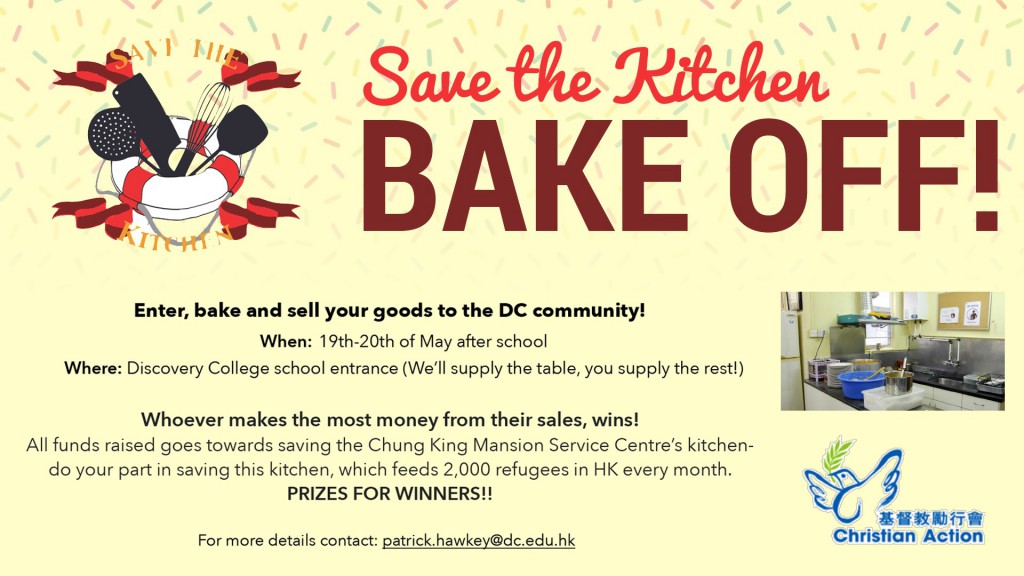 You might not see it day to day (or you might choose not to see it), but there a large number of refugees and asylum seekers here in in Hong Kong. Related to the issues of conflict and political issues we see on the news, a number of refugees come to Hong Kong to seek refuges and asylum. Something that many would not realize is that one third of this cities population is actually comprised of refugees. Many of the founding families of Hong Kong fled here, seeking safety and haven, far away from Mainland China during the 1950s Cultural Revolution. These were people fleeing from endless war and violent persecutions – similar to today’s refugees coming to Hong Kong

Ongoing global conflicts, whether religious, economical, and political, have left individuals to whole families no opportunity but to leave homes, possessions, loved ones, and identity. Hong Kong reprises its role as a popular sanctuary for 21st century refugees and asylum seekers; a role that we hope can accommodate, and provide dignified living standards for all.

Hong Kong is now home to thousands of refugees and asylum seekers leading lives which are increasingly under privileged. Due to the higher and higher costs of living, a refugee’s life is heavily subsidised. Christian Action’s Chungking Mansion Service Centre (CKMSC) is one of Hong Kong’s most prominent refugee charity organisation. Through providing humanitarian assistance, education and training, and psychosocial support to refugees, they advocate for a refugee tolerant and accepting city and system. The CKMSC is known for its kitchen, directed at serving refugees on a day-to-day basis. The kitchen’s daily food assistance programme provides vital sustenance to men, women, and children fleeing from war, torture, and other unthinkable violations to their human rights by offering three meals a day during the week and a healthy lunch on Saturdays. Meals are prepared by a full-time cook and a network of local partners, including churches and schools; Feeding Hong Kong and FoodLink. The CKMSC kitchen is more than just a place to eat- it is a “home away from home” where refugees are able to connect with the community in a safe and familiar place that serves nutritional meals. The CKMSC food programme provides close to 20,000 meals a year, and is perhaps the only space of its kind in the city.

However the CKMSC is in danger of losing its food programme, and needs vital help to save it. Financial support hasn’t been enough to cover all costs, even through strong subsidisation from kinds churches and individuals. To support the kitchen in continuing to support Hong Kong’s refuges, a group of Discovery College students have set up a ‘Save the Kitchen Bake Off’ charity event. Students are encouraged to gather friends to create a team, bake their own goods and then sell competitively. Who ever sells the most, WINS! All money goes towards helping sustain the food program CKMSC is running.

Without the food program, refugees and asylum seekers are forced into buying expensive groceries and meals, this can even lead to homelessness and starvation! If you want to get involved in helping the underprivileged, the mistreated, then enter your team in the ‘Save the Kitchen Bake Off’.   Please contact for more details patrick.hawkey@dc.edu.hk.