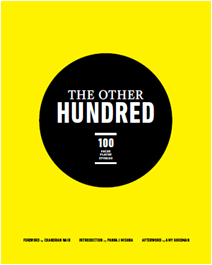 DC currently has on display in its foyer “The Other Hundred Exhibition”.  The Other Hundred is a not-for-profit photo-book initiated by the Global Institute For Tomorrow (GIFT) aimed at providing a counterpoint to the mainstream media consensus about some of today’s most important issues.  The DC exhibition, on display over the next four weeks, highlights profiles of some of the 100 featured in the book.

Organisers of the book say that “At its heart, The Other Hundred is an attempt to introduce its readers to the vast majority of people, ideas, places and cultures simply ignored by most major media publications. Whether it is an excessive focus on extremes of wealth or poverty, the obsession with whatever is dominating the current news cycle or the pushing of a particular political agenda, mainstream news no longer accurately reflects the experience of most people around the world”.

It is timely for the event to be held at the same time of our No Boundaries week, which has as one of its aims to have DC students see, meet and interact with people who could be considered as members of ‘the other 100’.