73 million sharks killed globally each year for shark fin trade, a trade that is centred in HK. 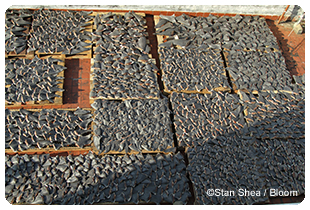 This picture, taken earlier this year, shows thousands of shark fins being dried on a rooftop in Kennedy Town.  The picture paints a troubling picture of the state of shark conservation.  How could you take action to help address this issue?  Here is a related post, and this report from WWF outlines more action you can take:

WWF has been advocating that the public “say no to shark fin” and we launched the No Shark fin Individual Pledge last year. So far more than 7,100 individuals and 147 corporate have pledged not to eat or consume shark fin products, while 114 restaurants and hotels have committed to provide Alternative Shark Free Menu, either providing alternatives for customers, or implementing a total ban on shark fin dishes . Yet, as the photos show, Hong Kong remains a key shark fin trading hub.

To help combat this problem and minimize local demand for shark products, we need your help: starting today, please ask everyone you know to pledge not to consume any shark fin products.

In order to strengthen worldwide trade regulation (e.g. CITES and ban on illegal trade) and the public’s demand  on consuming sustainable products, WWF calls for the Hong Kong government to collect and release full trade statistics of shark fin including information on species, volumes and country of origins.  This type of scientific identification of random samples of shark fin, through DNA testing for example, is essential for developing verification purposes.

WWF and other environmental groups have launched a petition, We’re urging the Hong Kong government to make a public policy of not to serving shark fin in official functions.